December 17, 2019
Throughout this semester, I have revealed the impacts that the Everglades has withstood as the result of man. Here is a slightly more optimistic article about alligators, which are now thriving after successful conservation efforts! 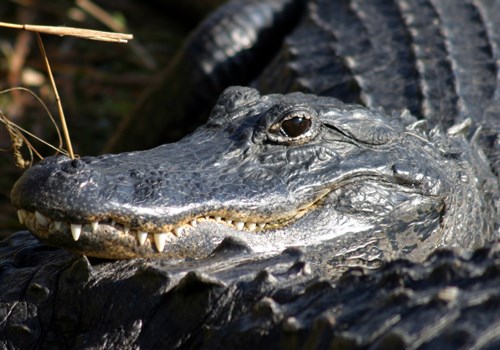 (NPS)
Driving along the long, straight, roads through Everglades City, Florida, it’s difficult to miss the characteristically large, dark shape of an alligator sunning itself along the banks of the bordering wetlands. As an apex predator and keystone species, the relative abundance of this large reptile is not only a cherished sight for the many visitors who explore the Everglades annually, but a vital part of maintaining the delicate wetland ecosystem. Although now numbering in the millions, the American Alligator was once almost wiped out from it’s range in the Southeastern United States. It took the combined effort of conservationists and federal/state governments to guarantee the future of this remarkable species for generations to come.
Without American alligators, the Everglades would suffer heavy losses in biodiversity. As a keystone species, alligators are ecosystem engineers, modifying their wetland habitats by constructing “alligator holes,” or “wallows.” These large pools remain wet throughout the dry season, providing important habitat for many other organisms, including fish, frogs, tadpoles, turtles, and snakes (Reese 1915). Without alligators, it is doubtful that many native species would be able to survive droughts. Alligator nests also create habitats, providing nests for other reptiles, such as turtles and some snakes (Bondavalli & Ulanowicz 1999). Predation by alligators further benefit some species via predator reduction: high consumption of snakes and fish is indirectly beneficial to amphibians, Galliformes, small mammals, and invertebrates (Bondavalli & Ulanowicz 1999).
Despite their many environmental perks, alligators were once nearly wiped out completely. The rapid decline of the American alligator has been attributed to habitat loss and overhunting. There are a variety of products that can be taken from alligators, including their skins, eggs, preserved heads, and claws (Schmidt 1922). Extensive harvesting of these commodities throughout the 1800s and early 1900s pushed the American alligator to the brink of extinction by the 1960s (US FWS).
It took until 1966 for positive change to become a reality for the American alligator. Due to pressure from scientists and conservationists, preliminary laws started being passed that would effectively protect the alligator from hunting indefinitely. Soon, the US Fish and Wildlife Service and state wildlife bodies had the power to prevent extinction. The Endangered Species Preservation Act of 1966, which included the alligator as a threatened species under the “Class of 1967,” was one of the first federally organized efforts to protect endangered species. This landmark legislation would eventually evolve into the Endangered Species Act of 1973, and came with the necessary funding to monitor population sizes and prevent poaching (US FWS).
Unfortunately, the initial laws were not enough to stop the alligator’s decline. Conservationists like Wayne King formed the American Alligator Council in 1969 to further advocate for the vulnerable reptile. King himself lobbied state governments to prevent loopholes that allowed poachers to thrive, such as labeling alligator skins as “crocodile.” As New York State was the premier importer of crocodilian skins (and the federal government was slow to act), King lobbied for Edwyn E Mason, chair of the New York agriculture committee, to ban the import of easily misidentified species such as crocodiles as well. Although immediately challenged by the clothing industry, the Mason Law was determined to be constitutional, and still stands in New York State today. Within the following 5 years after the passage of the Mason Law, California, Massachusetts, Illinois, Connecticut and Pennsylvania also passed laws prohibiting crocodilian commerce (Rieser 2012).
Some federal laws, like the Lacey Act of 1900, also aided in alligator recovery. The Lacey Act prevented the sale of certain illegally harvested animals between states (mostly birds at the time of passage), which greatly reduced poaching. In 1969, the Lacey Act was amended to include reptiles as a result of efforts from the American Alligator Council and other conservation groups (Anderson 1995).
In 1987, just 20 years after its initial listing, the alligator was removed from the endangered species list. Now,  the focus is no longer on preventing extinction, but on maintaining a population of several million alligators throughout the Southeastern United States (US FWS).
A switch to sustainable harvesting practices has perhaps solidified the long term success of alligators. Although the alligator is still protected federally, hunting of alligators is regulated by data collected by state wildlife bodies. In Louisiana, annual alligator quotas are determined by hunting tags, like other big game, which is based on the “quality of alligator habitat and population estimates based on aerial nest surveys.” Egg collection in Louisiana is also sustainably managed, requiring ranches to release 12% of hatched individuals back into the wild, similar to a “head start” program (Elsey & Woodward 2010). Florida, too, carefully monitors the taking of alligators. The Florida Fish and Wildlife Conservation Commission has determined that “populations remain stable when up to 6% of alligators over 1.8 m long… or up to 50% of located nests are collected for ranching” annually (Elsey & Woodward 2010).
Besides sustainable hunting, alligator ranches reduce the amount of wild alligators that are killed for their unique commodities. There are as many as 650,000 alligators on farms (as of December 2008), which produce 20,000 eggs each year. This growing practice diminished the market for illegally hunted wild alligators by flooding it with farmed alligator products, and provides a way to replenish diminishing populations (Elsey & Woodward 2010).
Thanks to the efforts of those involved, the population of alligators in the United States now numbers in the millions. Additionally, the sustainable use of alligators generates up to $70 million dollars annually, an ecosystem service that would have been defunct had the alligator declined into extinction (Elsey & Woodward 2010). They are considered one of the greatest conservation success stories, proving that advocacy, government intervention and careful implementation can save a species from the brink of extinction.